I didn’t want anybody to think that I’m lost in cyberspace, so here’s a quick look at of projects:

Here’s a look at some of the families for Shades 2: Suburban Jungle Warfare coming this November: 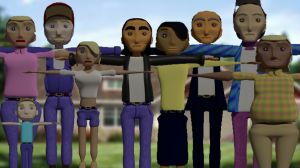 I wanted to have the Starrs (on the left) all grouped visually through denim, while the Reagans (center) are much less cohesive, and the Aceys (right) are supposed to be visually hard to identify where they each fall on the Gender spectrum.  Teddy Reagan is wearing a cool version of his father’s Jacket (center), but paired with jeans because he is secretly dating Selena (busty girl next to him.)

Each of these is a variation of the other: I started out with one blender model and then tweaked it until I got these different body/head shapes, while making them all look like they’re from the same art style (instead of starting each one from scratch).  Now it takes me about one evening to tweak a character, which is good, because I still have three more family groupings to go,