I need a truck for Penelope Kinnison to drive in the upcoming project Kheprit.  She’s a driver in a science fiction mining setting.

I looked at some pictures of dump trucks for reference, and decided a truck needs a cab, the bed that raises up, the piston that pushes it up, bumpers, doors, side mirrors, some lights, a tailgate that comes up or down, and big wheels.  I thought about tracks, but they didn’t read as trucks but as tanks.  This is not a military vehicle.  I Google imaged some dump trucks until I thought I had a pretty good idea, and then I modeled the first image.

One of the things I did was make sure that both the tailgate, the bed, and the doors were separate pieces, to make it easier to rig them later.  I also put the piston in there, even though I don’t think Penelope will be dumping her truck so far.  I also put a box inside the cab, to soak up space.  If I need to put Penelope in the truck, I’ll do it later, in post production.  Modeling a cab interior is too much render work for unseen faces.

The wheels are linked to the main bone: As I pose it forwards or back, the wheels turn.  I thought about making the wheel bones just a bit off-center with the model: This would make the wheels “jiggle”like a suspension over rough terrain.  There’s also a steering system on the front wheels.  When I made the bed rise up, I realized I needed to fix the back bumper as well so that the bed didn’t smash it.  There was a little modeling redo there too.

I think I did pretty good here.The lights Emission Strength is driven by bones, so the lights will glow based on the bones.  You can see that I put a logo on the side and front of the truck.  I should probably put a number on the side, since each driver would be assigned a specific truck.  Observant people will notice that I since thought about adding a “windshield wiper residue” texture to the front windshield, I modeled some quick windshield wipers for the front of the truck.  I also pulled the grill forwards a little, since the texture of the truck, not black, was showing between the bars of the grill.

All in all, not bad for a day’s work!

I mentioned the texture refinements?  Also, I think that I could get those stacks to belch a little fake smoke if I tried. 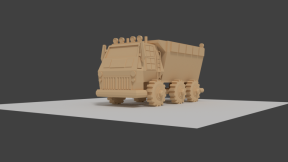